Waiting for the Wii 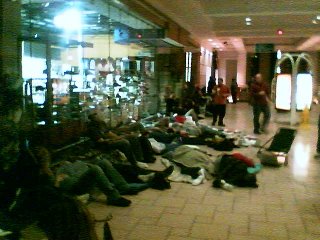 It's almost 5am, and I've been waiting in line at the Best Buy in Carousel Center in Syracuse, NY to get one of the approximately 120 Nintendo Wii's at launch. Someone who identified himself as a former Best Buy employee has been writing place numbers on people's hands in an effort to prevent line cutting. I talked to the guy who was #2; he was here at 7pm. I got there at about 11:30pm, and I'm #71.

The Circuit City downstairs has 38 units, and there's a much smaller line. I guess people just didn't think of it. I visited the Cicero Wal-Mart at 10:30pm, and they had already given out their Wii vouchers to the people who had been in line. Some people have mentioned that the Wal-Mart sales people were getting increasingly testy and rude to potential customers, and apparently all the Wal-Marts in the area were completely sold out of their Wii consoles before midnight even hit.

Most people in line in the hallway closest to the Best Buy are sleeping. The crowd is mostly 20 somethings, but there are some exceptions; a business man in his 50's, a man with his 12 year old son, and a few older women playing Scrabble.

People have laptops, consoles, TVs, and boom boxes. As the night wore on, the energy level has dropped. Smashbrothers tournaments have started, people have Nintendo DS systems playing head to head... the atmosphere is very friendly. The only rumors are about launch numbers nation wide, not about how one store really has a smaller number or anything negative like that.

Someone already has a Wii from another store and is letting people play a round or two. People queue up politely, play a round, and hand it to the next in line. Very cordial. Nobody has gotten angry, violent, or unruly the entire night.

I've been asking people if they're here for business or pleasure. Interestingly enough, most people are here to buy and play this system, and after playing a round of Wii Sports (boxing), I can see why. It's a hell of a lot of fun.

Update - 9:45am, I walked out of Best Buy with a Wii and The Legend of Zelda: Twilight Princess.

Update #2 - great xkcd comic on the subject of console lines.

I am in CNY also. I went to three Walmarts last night to try and get a Wii: Clay, Cicero and Central Square. You are right. All had handed out numbers by about 10pm and were effectively sold out at midnight. I was too late.

I called Best Buy at the Carousel Mall at 10am this morning. They were sold out, Customer Service said.

I have small kids, so I could not spend the night online like you did. At Walmart, people were saying to go to the Carousel Mall and wait the night out. I was hoping to get one before the Thanksgiving holiday so that the kids could play with some family that we have coming to visit. The GameCube will need to suffice for now.

I am glad you got a Wii. I found your blog from a Digg article about your $80 Linux server in 45 minutes post.