One of my friends is a manager at a local movie theater, which uses a digital projector to show advertisements between features. After seeing the It Burns When I Wii video, we figured we could one-up it with the equivalent of a 344" television screen. We wanted to use my friend's Nintendo Wii in the theater, but we didn't want to have to deal with yards of cabling. Inspired by doctabu's design, I built my own wireless sensor bar for less than $20. Doctabu left out something important; a resistor, which is needed to limit the current to the LEDs. 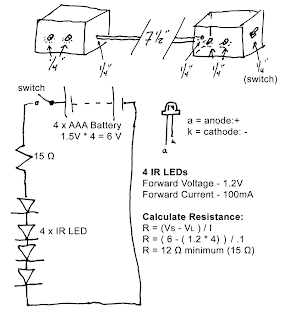 Parts - what I recommended:

My design consists of two IR emitters connected by a single piece of wire in a series circuit. I left the battery holder on the outside to make it easier to change the batteries.

When you build your own and you're finished soldering it together, put the batteries in, take it in a dark room and flip the switch. The LEDs will have a very faint, flickering red glow. Infrared is beyond the range human sight, but there's a little bleed-through into the visual frequencies. Some cameras with will be able to pick it up as a greenish glow. To use the emitters, turn the device on and place it on a level surface with about 6-7 inches between the two inner LEDs. 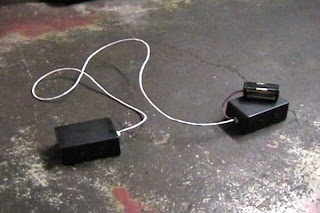 I built the wireless sensor bar, brought it over to the theater and tested it on a regular television. Fortunately, it worked! After the patrons left, we hooked the Wii up to the data projector and house sound, put in Wii Sports, and brought the controllers and the wireless sensor bar downstairs. We set the emitters on the backs of two chairs and stood a few rows back. The wireless range of the controllers was great enough to work! We suffered no technical glitches from the distance; we could even play up on stage, craning our necks up at the gigantic image, immersing ourselves in the game.

In conclusion, there's more than one way one can Wii, and sometimes, size does matter.

That is one awesome setup, man. I wish I could've been there.

what? a composite cable? no t even component? in a screen that big, it must have sucked in resolution terms...

Im gonna make one of these! just if i ever find a theater to play with :D

Quick question... Was the sensor bar accurate in the Main Menu? Particularly, did it offer you a full range of motion in the Y (vertical) axis? I'm asking because I built a similar sensor bar for my projector (~100"), and the vertical range is heavily compressed. In other words, the hand icon will appear at the bottom if I pointed my remote to the bottom of the screen, but it would have reached the top by the time I got to the middle of the screen with my remote.

Just wanted to see if this is a common problem, or if it's just my shoddy workmanship. :)

We made a 720p HD Video on how to make a wireless sensor bar with an on off switch. We didn't use a resistor, but the bar has lasted us a few days with our replacing the 2 AA battery. It works great on our 53inch HDTV and an Infocus projector with a 100inch screen. and it worked just fine on Y axis too on both screens. Our video is here: http://www.psphacking101.com/

These directions are awesome. My theater had its annual holiday party earlier this evening, so I made a wireless sensor bar and it worked perfectly... Wii on the big screen was definitely a big hit.

Should of used another game then WiiSports. The only time the sensor bar is used is the menu. None of the games use he sensor bar.

I just made one using your design. Works Great. I went ahead and put the battery pack in the side without the switch, tight fit, but it works. I also put about a 3 foot cord inbetween the two, and it now sits on either side of my center channel speaker on top of my tv. . (works better than the sensor bar that comes with the Wii.) Thanks!

Your supply is 6v, your resistor is 15 ohms. That means a voltage drop of 1.5v over the resistor.

Why not just use 3 AA batterys and drop the resistor?

Hello Jon,
Slightly off subject but I really like the music at the start of the video.
Looking at the credits are you the man responsible and if so, is there any chance of a copy :)

Would you consider selling a unit. I like how smooth the design looks it is not as ugly as others. I would build my own but parts are harder to find since Radioshacks in canada (Now the source) do not have the same stock. Infact they have poor selection. I don't even have a Wii yet. Just preparing for when I get one. I have 3 games and a Classic controller but Wiis are still out of stock

I think I will try to make these. I have a dumb question, if the sensor bar is not plugged in and these aren't plugged in, how do the talk to the wii?

Hey, Radio shack has a battery holder with a built in switch:

the wii does not get a signal from the sensor bar. the fact is that the sensor bar is simply a series of IR leds, i reverse engineered mine to find that the cord connecting from the wii to the sensor bar is nothing but a power cable. once the cord gets inside there is a positive and a negative side, and two tiny pieces of board. then there is a circuit made from the power cable to a resistor, the to the LEDs, from the leds to a cable that runs along to the other set of leds, to a resistor, back to the other side of the wire that runs between the two sets of leds, and into the other side of the power cable from the wii. the fact of the matter is, that as long as you have 2 points of IR the wiimote sees those and makes a calculation as to where it is, then it sends the signal to the wii via bluetooth. you can use two candles or even two small halogen lamps. in fact, for a few days while i was building my sensor bar, we used two candles, and you actually get a better result from using the candles than the stock sensor bar.

Couldn't you just use the wireless sensor bar made by Nyko, instead of making your own?

Because it is actually cheaper than nyko's and it allows for much larger screens for the fact you can use a longer wire for say a theater. or if you have an uber tiny screen just hook the boxes together on top of the mini-screen.

Why not use the existing Wii sensor bar with a low-voltage power supply. Who wants another battery operated device around the house.

The biggest complaint about Nyko's product is battery consumption.

I agree with Mark, please consider selling a Unit, it sure is a success.

Awesome and all thumbs up.

You could just haved use candles...

I was a bit disappointed. The entire production was about your home made wireless sensor bar, but not once did you do anything that actually uses the sensor bar. You could have done everything shown with no sensor bar at all. (besides navigating to the games, which I can only assume you did)

thats all fine and dandy, but im supposing it worked more wii sports doesnt use a sensor bar because as far as i can see theres no way your sensor bar hooks up or communicates with the wii in any way.

How can I make this Wii adapter powered by a 7.5v or 9v DC adapter? (eg. so it's not battery powered)

Thanks for any help!

Chuffing excellent. I want a friend who manages a cinema too!

Point of information though, doctabu didn't leave off the current-limiting resistor. He used a pot. I don't know why, but he did.

I found out in order to get the sensor accurate in the Y axis on a 100" the LEDs have to be placed in the middle of the screen (thats middle in the X axis and Y axis). So my question is should the two sides (2 LEDs from Left and the 2 LEDs from the Right) be exactly 7 1/2 inch apart or can I just place them on each side of my screen (this way allowing me to pace them in the X/Y axis center)?

I have a digital projector and have wired my ps3 to it for that cinematic view, it does not however compensate for graphics, I rand a disc on horse and rider and although generally the picture was fine I had to use a doubler to maximise the preformance and get a good picture.